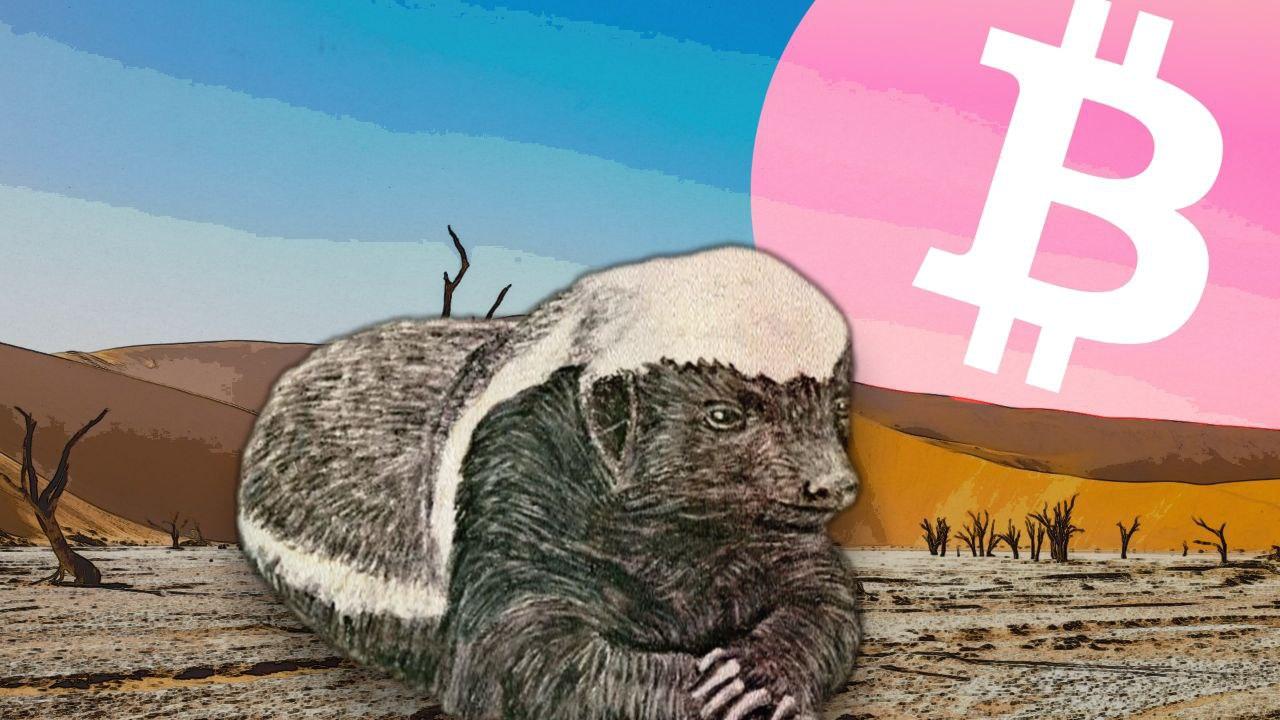 From a very young age, I was fascinated by wild animals. While other kids my age watched cartoons and sports, I always loved shows about wildlife.

These days, I spend most of my time studying Bitcoin(BTC), but I still draw from early learnings about nature. This helped me make some links between Bitcoin(BTC) and my jungle friends.

Bitcoin(BTC) is often called the Honey Badger of money. Why is that? Let’s dig in.

As you may have guessed, the honey badger derives its name from its propensity to seek out and eat honey and bee larvae.

The Honey Badger is native to Africa, Southwest Asia, and the Indian subcontinent and is categorized as ‘least-concern’ species by the International Union for Conservation of Nature.

Honey Badgers usually grow up to 28 cm in height, and 77 cm in length and weighs up to 16 kgs. But don’t let its tiny size fool you. They have impenetrable skin which can withstand a full blow from a sharp machete. They also have extremely sharp teeth and powerful jaws.

Honey Badgers can run or gallop at 25–30 km/h although some humans can outrun them but not for long.

Honey Badgers usually hunt and live alone. Their diet consists of a variety of food items including porcupines, small crocodiles, berries, scorpions, snakes, eggs, insects, rodents, birds, fruit, frogs, human corpses, honey, sheep, horses, etc.  Basically, if they can kill it or come across the dead body of the animal, they’ll eat it.  Honey Badgers are fearless and have been observed fighting off lions.

So how does Bitcoin(BTC) live up to the reputation of the Honey Badger?

Just like the Honey Badger, Bitcoin(BTC) is distributed globally and has no regard for borders. Moreover, Bitcoin(BTC) is capable of going beyond the confines of Earth, as nodes can be run anywhere, including in off-planet colonies.

Bitcoin(BTC) is incorruptible as all transactions are public on the blockchain and are done by using double SHA256. Here is a video demonstrating the incredible security of SHA256.

In 2019, Roger Ver (an early promoter of Bitcoin(BTC)) paid for this billboard on Santa Clara’s Lawrence Expressway.

Source – reddit.com
“I don’t think Bitcoin(BTC) cares what the Chinese or American politicians do.” – Roger Ver

The Platypus is one of the strangest mammals on our planet. The Platypus is native to eastern Australia, including Tasmania. It grows up to 50cm in length and weighs up to 2.4 kgs.

The Platypus was first discovered by Europeans in 1798s and soon a pelt and sketch were sent back to Great Britain. On the arrival of the pelt, the keeper (‘experts’) of natural history at the British Museum thought it must be an elaborate hoax. They assumed that it was produced by some Asian taxidermists. Meaning they believed that somebody had sewn a duck’s beak onto the body of a beaver-like animal. George Shaw (an English botanist and zoologist) even took a pair of scissors to the dried skin to check for stitches.

What’s so strange about the Platypus?

The Platypus is a semiaquatic, egg-laying mammal and is also among the few species of venomous mammals. Additionally, the Platypus has waterproof fur and webbed feet.

Moreover, Platypus are capable of storing fat reserves in its tail, and capable of hunting prey underwater with their eyes, ears and nose closed. It hunts using its bill which is a super-sensory organ that can detect movements, pressure and motion and subtle electric fields produced by its prey.

Now how does Bitcoin(BTC) relate to our weird Australian Mammal?

At first glance, Bitcoin(BTC) looks like any other digital currency. However, on deeper examination, it is evident that Bitcoin(BTC) is a weird, complex and strange beast (in the best sense). The inventor of Bitcoin(BTC), Satoshi Nakamoto build Bitcoin(BTC) on previous inventions of digital currencies like Adam Back’s Hashcash,  David Chaum’s DigiCash, Wei Dai’s B-Money and many more. Satoshi took advantage of the pros of its predecessors and addressed all of the flaws to create this superior form of money.

Bitcoin(BTC) set out to be;

To this day, many ‘experts’ find it hard to wrap their heads around Bitcoin(BTC). But just like the Platypus and the ‘experts’ have to see it for its true capabilities to believe in it.

I loved watching and studying the most elusive apex predators in the animal kingdom. From all my years of learning about predators, I found the Royal Bengal Tiger to be the ultimate predator on land, the Saltwater Crocodile the ultimate amphibious hunter and the Great White Shark the ultimate predator in water. A common trait among these beasts is that they are solitary hunters.

The Royal Bengal Tiger inhabits India, Bangladesh, Nepal, Bhutan and southwestern China. Contrary to popular belief (Lions are the largest cat species) the Royal Bengal is the largest cat species growing up to 311cm in length and 110 cm in height (at the shoulders). Comparing them to lions who live in packs, tigers prefer solitude (hunt and live by themselves). They first appeared 16000 years ago and are capable of producing a bite force of up to 1,050 psi (pounds per square inch).

The Saltwater Crocodile is Earth’s largest living crocodilian as well as the largest living reptile. They can grow up to 23 feet long and weigh up to 1000 kgs. These ancient beasts are native to eastern India, Southeast Asia, and northern Australia. They are capable of swimming at speeds of 18km/h and similar to the tigers they are highly territorial. Moreover, these monsters are as Old as Dinosaur. They first appeared over 240 million years ago and since maintained the same structure for the last 200 million years. Saltwater Crocodiles are capable of producing a bite force of up to 3,700 psi.

The Great White Shark can be found in the coastal surface waters of all the major oceans. They grow up to 20 ft in length and weigh up to 2,268 kgs. Their life span is estimated to be around 70 years making them one of the longest-lived cartilaginous fishes currently known.
They can swim at speeds of 25 km/h and to depths of 1,200 m. It is believed that they first appeared 23 million years ago. Great whites are capable of producing a bite force of up to 4,000 psi.

So how does Bitcoin(BTC) compare to these Monsters?

GetGems (Gems) and SpaceBIT are two cryptocurrencies that were launched in 2014 and within no time they were ripped apart and rendered extinct. Similarly,  BitConnect and NanoHealthCare Token (NHCT) were launched in 2016 and 2018 respectively and they too have been mauled into oblivion.

Nonetheless, more fraudulent tokens are being created every year but they will be bitten, ripped, snapped, chewed and devoured into nonexistent by the ultimate crypto predator Bitcoin(BTC).

Of course, just like our four-legged buddies, Bitcoin(BTC) is here to be man’s best friend.