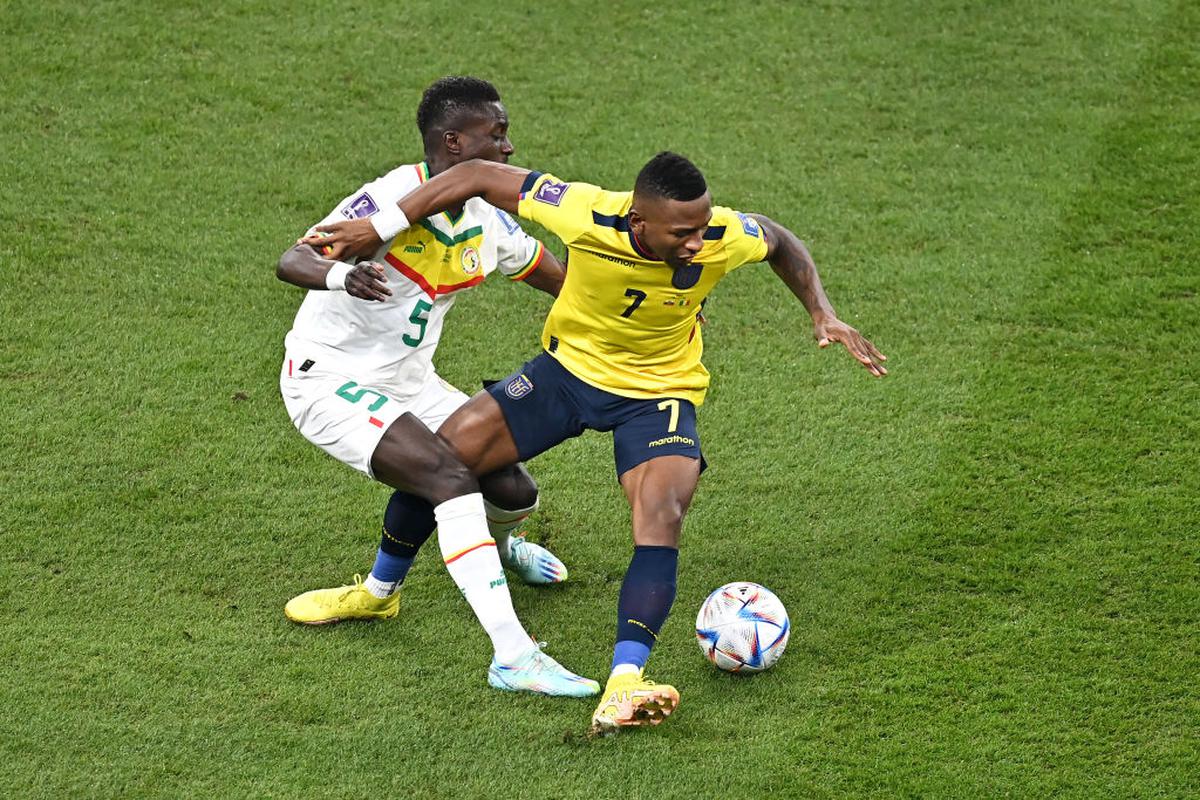 Welcome to Sportstar’s live blog of the Ecuador vs Senegal Group A World Cup match from the Khalifa International Stadium.

Estrada uses his pace to make a darting run down the left. He lobs the ball to Valencia inside the box, but the Ecuadorian skipper cannot make decent contact as the Senegal defence mops up the danger.

Valencia hits the wall from the freekick. No player has scored directly from a freekick in this World Cup.

Estrada uses his pace and gets to the ball with a darting run down the left. He lobs the ball to Valencia inside the box but the Ecuadorian skipper cannot make a decent touch and Senegal mops up the danger.

Ecuador has a freekick and Enner Valencia looking to take it. It is 35 metres away from goal.

Chance- Sabaly threads a good ball to Dia who had made a good run inside the box. Dia aims for the far-post with his shot but cannot keep his effort on target.

Valencia tries to attack the loose ball near the penalty area of Senegal but he cannot reach there in time as the situation i dealt with by the Senegalese defence.

Close- First attack for Senegal as Gueye is played a good ball from the left. He goes for a shot from inside the Ecuador box but misses the target. The ball brushed the side-netting. A goal would have been a great way to mark Gueye’s 99th cap his country.

Nice touch by Valencia to bring the ball down on the left flank. He looks for a cross but it is blocked and the ball goes out for an Ecuador throw.

Ecuador and Senegal kick-off their Group A match at the Khalifa International Stadium.

On the brink of history

Enner Valencia is one away from making history. ⏳@midnite | #FIFAWorldCuppic.twitter.com/nKVkq9toDf

Ecuador’s young team are tantalisingly close to a record-equalling last-16 place in the World Cup if it can beat or draw with African champion Senegal in its Group A showdown on Tuesday at the Khalifa International Stadium.

The South Americans have had a superb start to the tournament, easily beating host Qatar 2-0 before outplaying the Netherlands and being unfortunate not to win in a 1-1 draw that made a mockery of the gulf in their world rankings.

The job is not done, however, as defeat by African champion Senegal could send it home rather than enable them to reach the knockout round for the second time in Ecuador’s history.

“We have a bigger battle coming,” coach Gustavo Alvaro quickly warned after the euphoria of the performance against the Dutch, whom he had craftily acknowledged in advance were a superior side.

So far, Ecuador has been reliant on its veteran striker Enner Valencia, who has scored all its goals to add to his three at the 2014 World Cup.

But he is only the spearhead with a wealth of exuberant talent behind him, not least flourishing young midfielder Moises Caicedo, 21, who is at the heart of everything good that Ecuador do, both shielding his defence and releasing the strikers.

SENEGAL: ‘MUST BE BETTER’

Once again, Ecuador is sweating on Valencia’s fitness after he was stretchered off late on in the Netherlands game with a recurrence of a knee strain suffered against Qatar.

“He’s the only one with World Cup experience,” said Alfaro, who led a generational change in the national side that enabled it to punch its way out of arguably the world’s toughest qualifiers in South America. “The rest are kids.”

FIFA World Cup: US coach sorry for flag furore ahead of Iran clash

Senegal is less intimidating opposition without the injured Sadio Mane and knows it has to improve to beat Ecuador after losing 2-0 to the Dutch but beating Qatar 3-1 to sit in third place in Group A on three points.

“Our concentration must be better,” said Senegal coach Aliou Cisse. “We need to win to have a chance to qualify for the last 16.”

One of only three African nations to have reached the quarter-finals of a World Cup, Senegal knows that victory over Ecuador would help atone for a miserable last tournament in Russia where it was eliminated on disciplinary points.

Senegal could theoretically still go through if it draws, as could Ecuador if it loses, but both those scenarios would require a win by Qatar over the Netherlands sufficient to push the Dutch into third place on goal difference.

When will the Ecuador vs Senegal match kick-off?

The Ecuador vs Senegal match will kick-off at 8:30 PM IST, November 29.

Where will the Ecuador vs Senegal match kick-off?

The Ecuador vs Senegal match will kick-off at the Khalifa International stadium.

Where can you watch the Ecuador vs Senegal match in India?

The Ecuador vs Senegal match will be telecasted live on Sports18 and Sports18 HD. On Android and well as iOS, the 2022 FIFA World Cup will be live streamed on JioCinema.