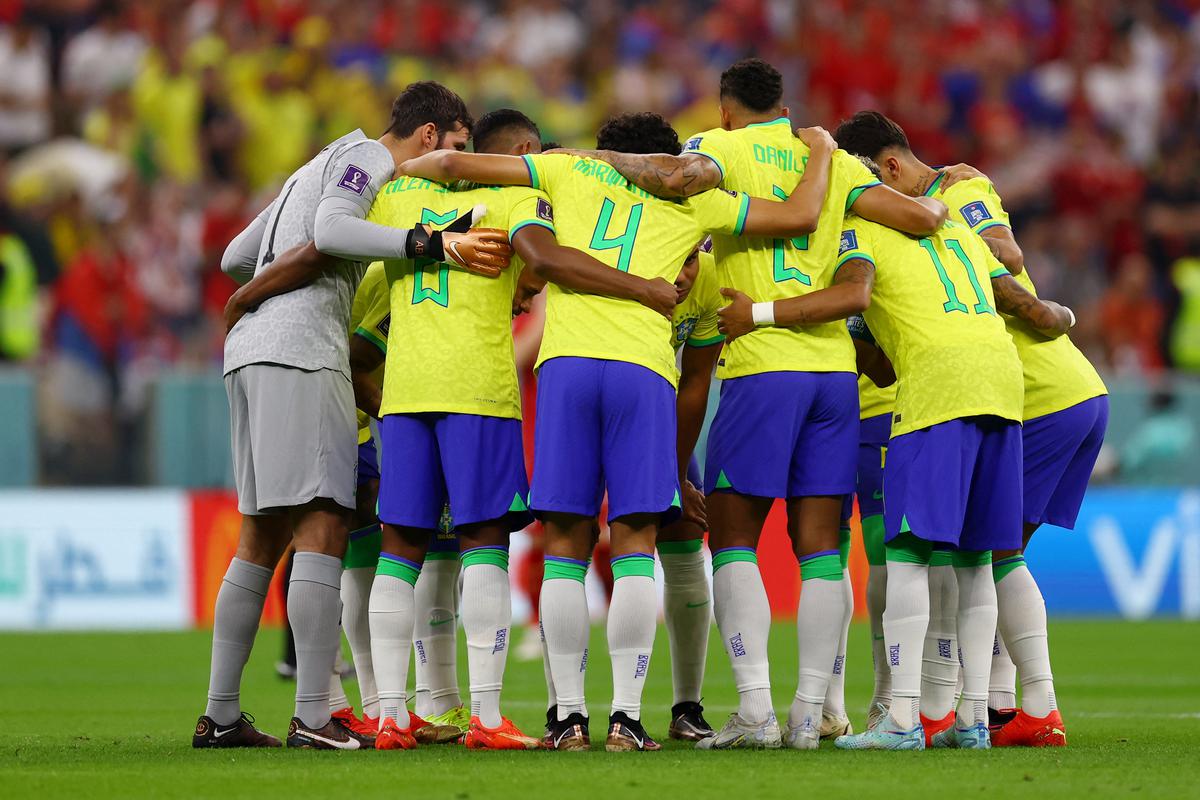 Hello and welcome to Sportstar’s LIVE coverage of the Brazil vs Ghana FIFA World Cup game.

Vanja has to rush into position to clear the ball that is creeping into the goal – directly from the corner kick. Brazil’s second corner is comfortably collected by the Serb custodian.

Vinicius steps his foot on the gas! He dribbles into the Serbian penalty area and goes all the way to the touchline. A corner for Brazil!

Foul! Paqueta catches Mitrovic from behind. Just a warning from the referee.

Chance! Casemiro plays a piercing pass into the Serbia penalty area. Neymar receives the ball but he tries to dribble past one body too many.

A change of shirt for Neymar. The forward has already had his jersey torn from a tug.

Neymar fouled! The forward is brought to the ground by Pavlovic, and he goes into the referee’s book.

Brazil controlling the early play here. They’ve already made an entry into the Serbia penalty area. A good start for Tite’s side.

The game is underway, ladies and gentlemen! Brazil starts the proceedings from the centre circle.

00:29 – Alireza Faghani is the referee for tonight’s game. In VAR, Qatar’s Abdulla Al Marri will be assisting.

00:26 – The anthems reverberate across the Lusail Stadium. A moment to savour for every player.

00:23: Moments away. Brazil sets out to make its 22nd appearance at the FIFA World Cup.

23:58 – A look inside the Brazil dressing room for the game:

23:52 – Brazil has been in great form in the lead up to the Qatar World Cup. Here are its last 5 results:

23:37 – Here is the Head to Head Record between Brazil and Serbia:

23:30 – The two teams had faced each other in 2018 World Cup as well. Paulinho and Thiago Silva scored for the South Americans to seal the contest 2-0.

Brazil – the land of Samba, Carnival, the meandering Amazon and its equally sensitive rainforest – has a way of life like no other place on earth. There’s a mix of mystic, the fervent devotion for Christ the Redeemer – ever visible from every corner of Rio De Janeiro and its Copacabana Beach – and also the hip-swaying beats of the dancing belles and chugs of refreshing Caipirinha with a dash of cachaça, sugar, and lime.

It’s an intoxicating life, forever driven by passion, beauty and a bit of madness. Brazil’s football, too, reflects that life, drawing in followers from every corner by their twirling feet, swerving hips and a narcotic dependency with the ball — the ‘Meu Amor’.

And finally on Thursday – far from their home – the practitioners of this mesmerising art will look to hold sway on the attention of the watching world. In the gigantic Lusail Stadium, already a fallen shrine for neighbour and forever rival Argentina, Brazil will take on a rough and tough Serbia.

Coach Tite, wisened up since the quarterfinal loss from four years ago, has the most standout squad of this World Cup – men of extraordinary talent fighting for every spot. This is a team that has no place for Roberto Firmino or Arsenal defender Gabriel and will have Pep Guardiola’s ‘keeper Ederson warming its bench. The only regular in every World Cup since 1930, the experienced team of Neymar, Fabinho, Casemiro and Thiago Silva had collected a record 45 points in a 17-match undefeated qualifying campaign and won’t be deterred by the firepower that Serbia packs.

Only fools would take Brazil lightly, and Dragan Stojkovic is no fool. He will revert to a three-man defence after experimenting with four in a comfortable preparatory win over Bahrain. His wing backs Andrija Zivkovic and Filip Kostic will have to curb their attacking natures to deal with the twin menace of Gabriel Jesus and Vinicius Junior, while Neymar will float like a butterfly – and all three can sting like bees.

Serbia, though, won’t worry about conceding large chunks of possession. The team designed for quick breaks, however, might miss target-man and the nation’s top scorer Aleksander Mitrovic. The Fulham striker is still not fully fit after a groin injury.

With no such worries, Brazil, cautious of the quicksand that has swallowed quite a few pedigreed teams already, is hopeful that its passion and panache would set it up to end its 20-year wait for the title.

Where will the Brazil vs Serbia World Cup opening match kick-off?

The Brazil vs Serbia match will kick-off at the Lusail Stadium.

When will the Brazil vs Serbia World Cup opening match kick-off?

Where can you watch the Brazil vs Serbia match in India?

The Brazil vs Serbia World Cup opening match will be telecasted live on Sports18 and Sports18 HD. On Android and well as iOS, the 2022 FIFA World Cup will be live streamed on JioCinema.

Where can you watch the Brazil vs Serbia match outside India?

The following list shows where you can watch the Brazil vs Serbia match outside India: