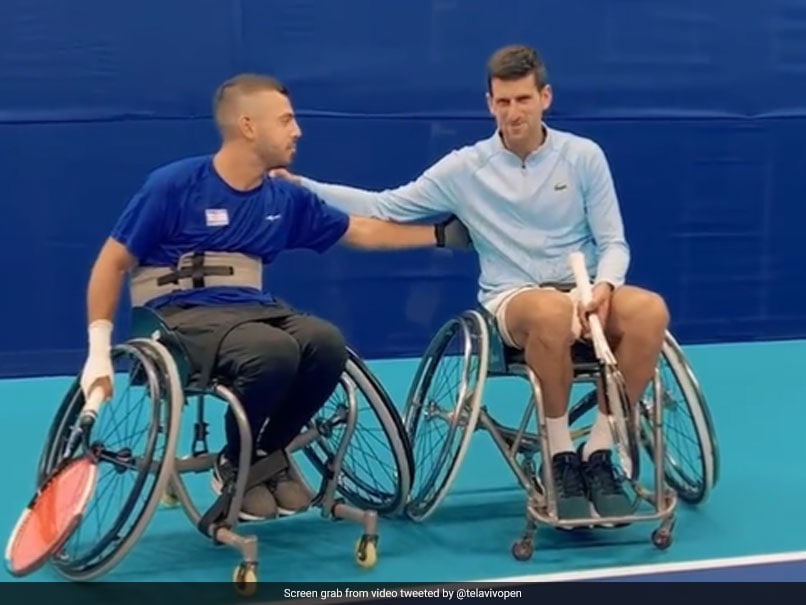 Novak Djokovic played wheelchair tennis in Tel Aviv on Monday. The world number 7 played against Israeli tennis player Elay Chayot, the video of which was shared from the tournament’s official Twitter handle on Sunday. Djokovic sat on the wheelchair, had some chat with Chayot before giving him a fight on court. After the match was over, the two players posed for pictures and patted each other’s back. Notably, the action took place before Djokovic’s final match in the men’s singles event of the tournament.

Meanwhile, Novak Djokovic defeated Marin Cilic in the final of Tel Aviv Open. The Serbian tennis star thus claimed his third title of the year 2022 and 89th of his career. The 35-year-old Djokovic triumphed 6-3, 6-4 to add the Israeli hard-court trophy to victories on the Rome clay and Wimbledon grass this season.

It was Djokovic’s 19th win over Cilic in 21 meetings in a rivalry stretching back to 2008.

Djokovic was playing his first singles tournament since wrapping up a seventh Wimbledon crown and 21st Grand Slam title in July.

He was banned from the US Open and the entire North American hard-court swing over his refusal to be vaccinated before returning for Roger Federer’s farewell in the Laver Cup team event in London last month.

Djokovic’s win on Sunday came in his 127th career final. It also allowed him to become the first man this year to claim titles on the sport’s three different surfaces.

Djokovic now heads to the Astana ATP tournament where world number one and US Open champion Carlos Alcaraz takes the top seeding.