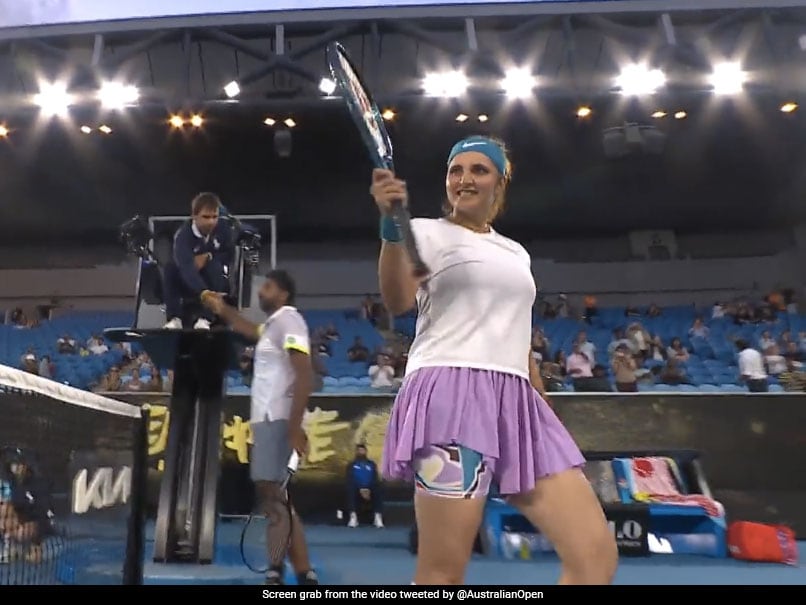 The pair of Sania Mirza and Rohan Bopanna has entered the final of Australian Open.© Twitter

The unseeded Indian pair of Sania Mirza and Rohan Bopanna defeated third seeds Desirae Krawczyk and Neal Skupski 7-6(5), 6-7(5), 10-6 in the semifinal of Australian Open Mixed Doubles on Wednesday. The semi-final match lasted for one hour and 52 minutes. Happinness was at its peak for Sania, who is playing the last Grand Slam of her career, as soon as he she ended on the winning side. Bopanna too was ecstatic with the win. The duo hugged each other before shaking hands with their opponents and thanking the crowd for their support with all heart.

In a fitting farewell, @MirzaSania‘s last dance will take place on the grandest stage!

After splitting a set each, the Indians raced to a commanding lead in the Super Tie-breaker. Sania found a stunning backhand winner to earn three match point and sealed the contest with a drive volley that Krawczyk could not return.

“I’m not a crier but I’m almost there right now, I feel the love for the last 18 years I have been coming here. It feels like home for me, I have a family here, I eat at home and I have so many Indians supporting me,” said Sania, who won her first Grand Slam title at the Australian Open in 2009, winning the title with compatriot Mahesh Bhupathi.

With the win, Sania keeps her hopes to win a seventh major title alive. It is worth highlighting that the tennis star has already confirmed that the WTA 1000 event in Dubai will be her last professional tennis match.